Mushroom Hunting With the Pros

See on Scoop.it – things i found 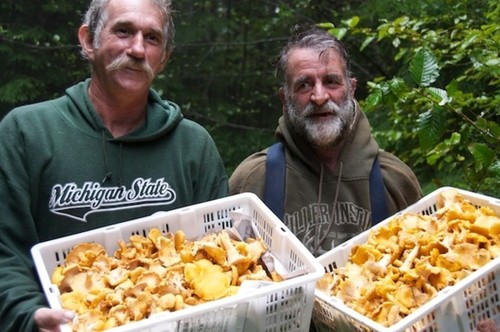 Langdon Cook:  “In early August I got a call from a producer for the PBS TV series Food Forward. He had seen a review copy of my new book, The Mushroom Hunters: On the Trail of an Underground America, and wanted to film itinerant mushroom harvesters for an episode on wild foods. I knew just the guy to talk to.

Doug is one of the characters in my book. He’s been hunting mushrooms commercially in the Pacific Northwest for 30 years. Before that he was a logger and he also captained a crab boat. Sometimes Doug cuts steel to make a little extra cash or digs razor clams. He’s been roaming up and down the West Coast for decades doing outdoor jobs to pay the bills, mostly picking mushrooms. In recent years I’ve been roaming with him, meeting the pickers and buyers who work in a hidden economy known as the mushroom trail. Many of the pickers are refugees — from the Old Economy at home or war-torn countries abroad. They move with the seasons, preferring the fluctuations of a crop tended by nature (and the Gold Rush hope of hitting the mother lode) to the more stable yet monotonous alternative of agricultural work.”